University plans special campus events for 2015-2016 (June 9, 2015) – This fall Carson-Newman University will launch a unique year-long themed event “A Simple Justice: The Celebration of the 50 th Anniversary of the Voting... 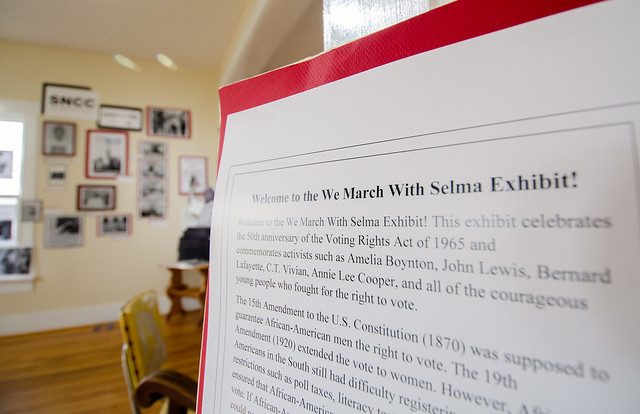 (June 9, 2015) – This fall Carson-Newman University will launch a unique year-long themed event “A Simple Justice: The Celebration of the 50th Anniversary of the Voting Rights Act.”

“This won’t be just a look at the past,” says Dr. Kara Stooksbury, chair of the Department of History, Political Science and Sociology at Carson-Newman. “We will be able to celebrate the history of this law as well as look at its impact today. Given recent rulings by the U.S. Supreme Court that have allowed states to restrict voting rights, the golden anniversary of the Voting Rights Act provides a significant opportunity to educate our young adults about very real obstacles associated with voting today.”

President Lyndon B. Johnson signed into law the Voting Rights Act on August 6, 1965, meant to enforce the 15th Amendment of the Constitution ratified by Congress in 1870.

The bill was created to guarantee African-Americans the right to vote and made it illegal to impose restrictions on any federal, state and local elections that were designed to deny the vote to blacks.

A major part of the celebration is through teaching, Stooksbury says. “Professors are infusing this historic moment into our curriculum in political science, history, sociology, drama, film, student research, religion and a liberal arts course required for our freshmen,” Stooksbury said. “We are also planning lectures and other events throughout the academic year to enhance what students are learning in the classroom and to address these issues in the larger community.”

Carson-Newman will host several programs across campus in the coming academic year to connect with the anniversary.

One highlight of the year will be C-N’s Great Ideas Lecture. Guest speaker will be Peter H. Irons, an American political activist, civil rights attorney, legal scholar and professor emeritus of political science at the University of California, San Diego. He is a celebrated author of many books on the U.S. Supreme Court and constitutional litigation, including “The Courage of Their Convictions” and “The People's History of the Supreme Court.”

Irons has lectured on constitutional law and civil liberties at the law schools of Harvard, Yale, Berkeley, Stanford and more than 20 other schools.

"The right to vote is a pillar of democracy. Justice is another,” said Carson-Newman President Randall O’Brien. “One might think voting rights for all would be a simple justice, and the idea is. However, justice is never simple, as our history reveals. We will celebrate our gains, excoriate our wrongs and anticipate a better tomorrow for all people."

In naming the theme for the year, Executive Director of University Relations Mary Leidig says the significance of a “Simple Justice” is enormous.

“The Civil Rights Act of 1964 was a product of the growing demand from civil rights leaders for the federal government to launch a nationwide offensive against racial discrimination,” said Leidig, who spearheaded the anniversary idea with faculty.

In calling for civil rights, President John. F. Kennedy identified ‘simple justice’ as the justification for passage of the Civil Rights Act of 1964.

This phrase supports Carson-Newman ideals and is in keeping with the coming year to celebrate the power of the Voting Rights Act, says Stooksbury.

Among the events being planned is a student exhibit of a mock 1950s voting booth.

“Visitors will get a glimpse of what it was like for African-Americans to attempt to vote during this time,” said Stooksbury. Additionally, the University’s annual Student Research Day will emphasize the voting rights act and its importance in history and now.